This tour brings together the best of Germany’s East and West steam railway heritage. Ride the narrow gauge railways in the former East and visit many preserved lines and museums in the West. Lots to offer both the rail traveller and enthusiast, with stays in some of Germany’s most attractive towns.

We take a mid-morning Eurostar from London St. Pancras to Brussels with an onward connection for Bonn. Our hotel for the next 2 nights is located adjacent to the station.

Enjoy an excursion on the Brohltalbahn, better known as the Vulkan Express. This narrow gauge line runs from Brohl to Engeln and the metre gauge train has some steep gradients to climb.

Day 3 – South to the Black Forest

A mid-morning train takes us south along the river to Freiburg, our destination for the next 3 nights. Our hotel is located adjacent to the station and the afternoon is free to explore.

Today we visit the Wutachtalbahn, possibly the most spectacular preserved standard gauge line in Europe, or even the world. Built as a strategic railway on the Swiss border, the journey takes you from Zollhaus-Blumberg to Weizen. The line has huge steel viaducts and bridges, a tortuous route looping back on itself several times and even includes a complete loop in a tunnel. We will ride the line in the morning and follow the afternoon train by coach – a chance to capture some superb photos.

This morning we head south to Haltingen where we take a ride on the preserved standard gauge Kandertalbahn which runs 13km to the pottery town of Kandern. This steam railway has been preserved as a historical working museum that celebrates the heyday of steam.

A mid-morning train to Karlsruhe where we board an InterCity train to Nuremberg. Our hotel for the next 3 nights is located adjacent to the station.

Free day to explore Nuremberg including its Railway Museum which is a short walk from the hotel and where InterRail Pass holders gain free entry. Alternatively you may wish to simply wander around this historic medieval city.

We have an excursion today to Neuenmarkt-Wirsberg, which was famous for the steep Schiefe Ebene during the German steam era and is now the home of one of Germany’s best railway museums. Virtually all the classes of engine in use at the end of the German steam era are represented plus some vintage electric and diesel locos. The museum is in the old roundhouse loco shed which still retains the feel of a working depot.

Today we head north via Naumburg and Halle to Wernigerode for a 3-night stay. We take a short transfer from the station to our hotel which is located across the market square from the picturesque town hall.

The Harz Narrow Gauge Railway (HSB) is by far the largest of the lines we visit, with a network of over 100km from Wernigerode in the northwest to Nordhausen in the south and the UNESCO World Heritage town of Quedlinburg in the east. We have a Harz Rover ticket for unlimited travel and your tour leader will devise two full day excursions covering as much of the network as possible including an ascent of the Brocken line (a “must do” on a clear day). The Brocken was a look out and “listening” post in Soviet days due to its commanding views across the west and today there is a museum at the summit telling the story of its role in the Cold War period.

Morning regional service to Hannover where we change to an InterCity service to the city of Rostock, located on the Baltic Coast. Our hotel for the next 3 nights is found adjacent to the railway station.

A short journey brings us to Bad Doberan, the home of a steam railway affectionately known as the Molli. The line runs to the coastal resort of Bad Kühlungsborn and its steam train famously runs through the streets of Bad Doberan just inches from pavement restaurants! The afternoon is free to return to Rostock at your leisure.

The Baltic Sea is a popular seaside resort in Germany and the isle of Rügen is a particular favourite destination. Its narrow gauge railway known as the Rasender Roland is an important tourist attraction and we ride the line for its entire length before returning to Rostock.

After breakfast we travel west to Essen for our final night. Arriving mid-afternoon gives those who wish, the opportunity to travel the 40 minute journey to Wuppertal to ride the Schwebebahn.

We travel to Cologne to catch the International ICE service to Brussels and then Eurostar to London, arriving mid-afternoon. 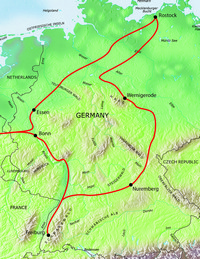 Please note - hotels can be subject to change